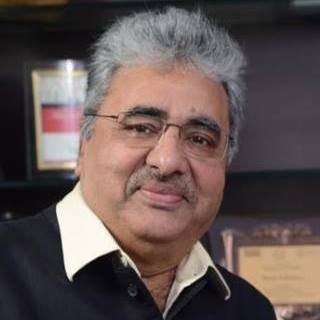 One of the most fascinating areas in the journey of progress and development of India has been its education sector. The magnitude of sheer numbers of stakeholders associated with this sector directly or indirectly, is awe-inspiring. If you were to add the number of parents whose children attend schools, the total count will dwarf the population of practically all countries of the world, save a few like China. Another noticeable feature of this sector is the remarkable dynamism and a prudent flexibility to keep on improving. There has been some paradigm shifts in several areas in terms of content, pedagogical innovations, and introduction of project based learning, as distinguished from the didactic style of learning.

Another thing which probably has influenced this process is the impact of multi-cultural ethos and international curriculums. There has been some kind of fusion and eventually the Indian education system has benefited. Changes have been happening over time but the one that have taken place in the last three months have been absolutely tectonic.  There has been a complete overhaul, a complete change of perspective by which we used to look at education, educational institutions, education managers, promoters and most importantly, teachers.

24th March – the Prime Minister announced the lockdown – and after that, 25th March onwards, everything in this country was shut. The shops were shut, restaurants were shut, so were the malls and cinema halls. Pilots were grounded. Taxi drivers could not move out of their homes. Government offices were not functioning.  But, one particular institution did not shut shop and that is the Institution of education. It continued. In fact, it continued with greater vigour because they really had to reinvent the entire process by which they were delivering. Children were at home, teachers were at home, and they could not connect with each other on a real time situation.  But, students and parents community wanted education to continue as if nothing had changed.

How do you imagine reinventing the entire process, the content, pedagogical situations, the means of delivery to students whom you could not even see? But, as they say,  necessity is the mother of invention. Suddenly, you found a large number of technological platforms mushrooming. Zoom came into operation. We had Microsoft  teams, we had Google Hangouts and whole lot of other platforms which were there  leveraged by  the teachers and that had to be done with a lot of imagination. It could not possibly happen otherwise because some of them, in fact a large majority of them were not conditioned or used to that mode of teaching.

It was a great responsibility and I have no hesitation in saying that the teaching community in India, took on this responsibility with such great elan, aplomb, and tremendous amount of excitement. It  seems to me that teachers are one of the greatest treasures that we have in this country. It would not be an exaggeration to state that our teaching community is our  national treasure. We need to preserve that treasure with all our strength, with all our commitment.

Here is a great opportunity for us, for our country when we can see that the normal economic activity like the manufacturing, services and many others that contribute to the overall economy, will probably take much longer time to begin again. But, the world, as we all understand, is now moving heavily towards knowledge economy and I think that this is a great opportunity for a country like India to harness its intellectual capital, in the form of knowledge economy. I think there is no reason why we cannot become world leaders.

Coming to the strength that we have – I think the teaching community really has to be given tremendous amount of respect which is overdue. We don’t pay them well. We do not provide them with the facilities that we should be doing like the western countries. According to our old tradition, Guru Brahma Guru Vishnu Guru Devo Bhav etc., but in real practice, do we do that? I think that  we need to restore all that.

Imagine, the way the teachers have  completely reorganized, reinvented. They were not familiar with the situational challenges that they were going to face. Around 40 to 50 students sitting in their own respective homes, along with the parents sometimes. And parents have become the watch dogs. Parents keep on saying all kinds of things, criticising the pronunciation, accent, concept clarity, etc. Teachers got to face all that and then make adjustments. In such circumstances, it is not possible to see the   body language of the child. The teacher is not even aware what the child is doing or whether the absorption is happening or not. But despite all these challenges,  he or she has been performing with absolute commitment.

I know lot of teachers who used to earlier work for about 7 to 8 hours and now working for more than 12 hours. My heart goes out to them. My salutation to all the teaching community in this country. I think it is time that we started respecting this great national treasure.

I would also like to mention that lot of parents keep on making certain statements now since they have the opportunity to sometimes sit next to the student – the child – when simultaneously listening to what is being delivered.  They make certain comments. I would like to mention this to these parents.  Parents – you are not a trained teacher,  you may be a trained parent at the most, but you are not a trained teacher. The person who is talking to your child is a Trained Teacher. He or she knows the art of teaching, knows what to say, when to say, and how much to say. So, please respect her word. There are certain issues – I am sure these can be addressed.

I would also make a strong  case for teachers, the management of the schools and would personally request all parents to make sure that the sustenance part of this program or teaching does not get jeopardized. I am sure they want the child to keep on studying every day, day in and day out. Moreover, as of now, a lot of add-on and co-scholastic activities are happening. The teachers are usually busy, hugely occupied in trying to deliver the best. So, it is the societies’ responsibility that if you want your child to continue being engaged in a fruitful, productive educational paradigm, you got to support that. You have to pay the fees in time. At the end of it all, the teachers’ sustenance depends upon no other source, except the one which is given by you on regular basis.

Today, fortunately, our expenses on other activities like fast food,  malls, cinema halls  etc.  is coming down.  Spending on education is a much better option than spending on material objects, since education is going to stay with you for a much longer period of time.

Again, my profound appreciation and felicitation to all teachers and the teaching community in this country. You have done a fantastic job and my salutations to all of you! What has really happened is that India has discovered a new category of teachers –  highly motivated, very strong, technologically very grounded. India has discovered them and I think teachers have also discovered themselves – the kind of potential they have.

Discover the Joy of Wellness in a live online session on POSITIVITY & HAPPINESS by Mr. Vinod Malhotra ,... read more

COVID NATURE’S WAY OF RESTORING BALANCE ON THE EARTH

A recent disaster has shaken the earth, a kind of World War III called COVID-19 or the novel CORONAVIRUS. Almost the whole... read more

Some of us may have heard about Artificial Intelligence. This is a branch of computer science associated with the... read more

An enlivening session for parents was organized at Seth Anandram Jaipuria School Sitarganj as a part of parent connect... read more

These are very unusual times. Something of this kind had not happened in the living memories of the last... read more

The year 2020 is proving to be a watershed, an inflexion point in the lives of the entire mankind... read more 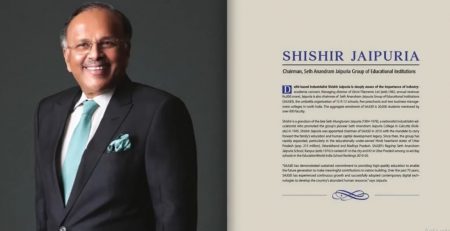 Congratulations to Mr. Shishir Jaipuria, Chairman, Seth Anandram Jaipuria Group of Educational Institutions who has been selected among the... read more